On one hand, Sheikh Abdullah had his own unique teaching style and on the other, he shared much in common with the Naqshbandi Sheikhs of the Golden Chain that preceded him. When reading such books as the ‘Beads of Dew from the Source of Life”, it can be easily imagined that Sheikh Abdullah, rather than one of the Khwajagan Sheikhs, is the teacher in the book.

Nevertheless, Sheikh Abdullah was very much a man of the moment and taught in a contemporary way based on classical Sufi principles, that provided a timeless element to his teaching. Whilst being firm and practical in his approach, his motives were based on his unconditional love for each student (or the Sufi term, murid). He was the perfect role model for students, being able to relate to his female students equally well as to his male ones. In turn, most of his murids loved him – they wanted to please him, which made the teaching easier.

Although murids were generally taught in a group environment, each felt that they were receiving their own personalised tuition. As time went by, many students realised that the Sheikh knew considerably more about their inner being than they did themselves.

Sheikh Abdullah had the uncanny skill of weaving his teaching with life itself. His training took on the reality of the life that the student was living. Each real-life situation that the student lived through was brilliantly designed by this Naqshbandi Master to shed light on a certain part of their character. This could then lead to their overall illumination, being a universal stage in the mystical journey.

Like any Sufi Master, it’s impossible to categorise Sheikh Abdullah’s teaching but some prominent aspects of his teaching were:-

The Sheikh was selfless with his time, being available to students almost every day of the year, year in, year out. He held Muslim Prayer classes on Monday nights, Dhikr on Tuesday nights, Public Talks on Thursday nights and Mevlevi Turning classes on Sunday nights. The other nights he gave Sohbet at his Zawiya. It was possible to arrange a private meeting with the Sheikh, when he would sometimes give dream interpretations.

Although the Sheikh didn’t always do what a murid expected, his close murids felt that he never let them down. In fact they owe him an enormous debt of gratitude for the time, effort and love that he poured into them, improving them in so many ways. He worked tirelessly and suffered hardship to achieve his heartfelt desire that each pupil would evolve and expand their consciousness to their full potential. 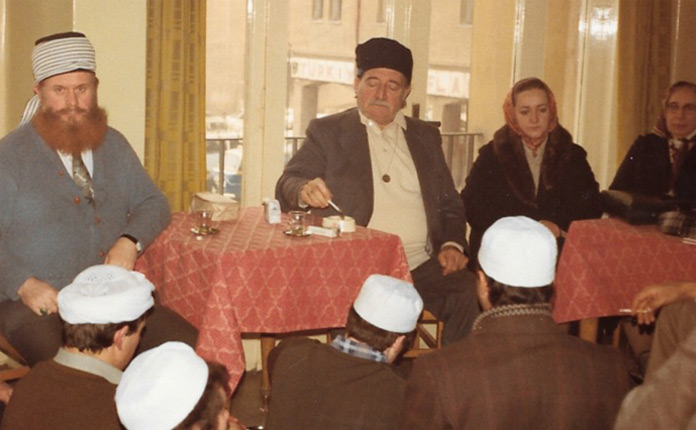